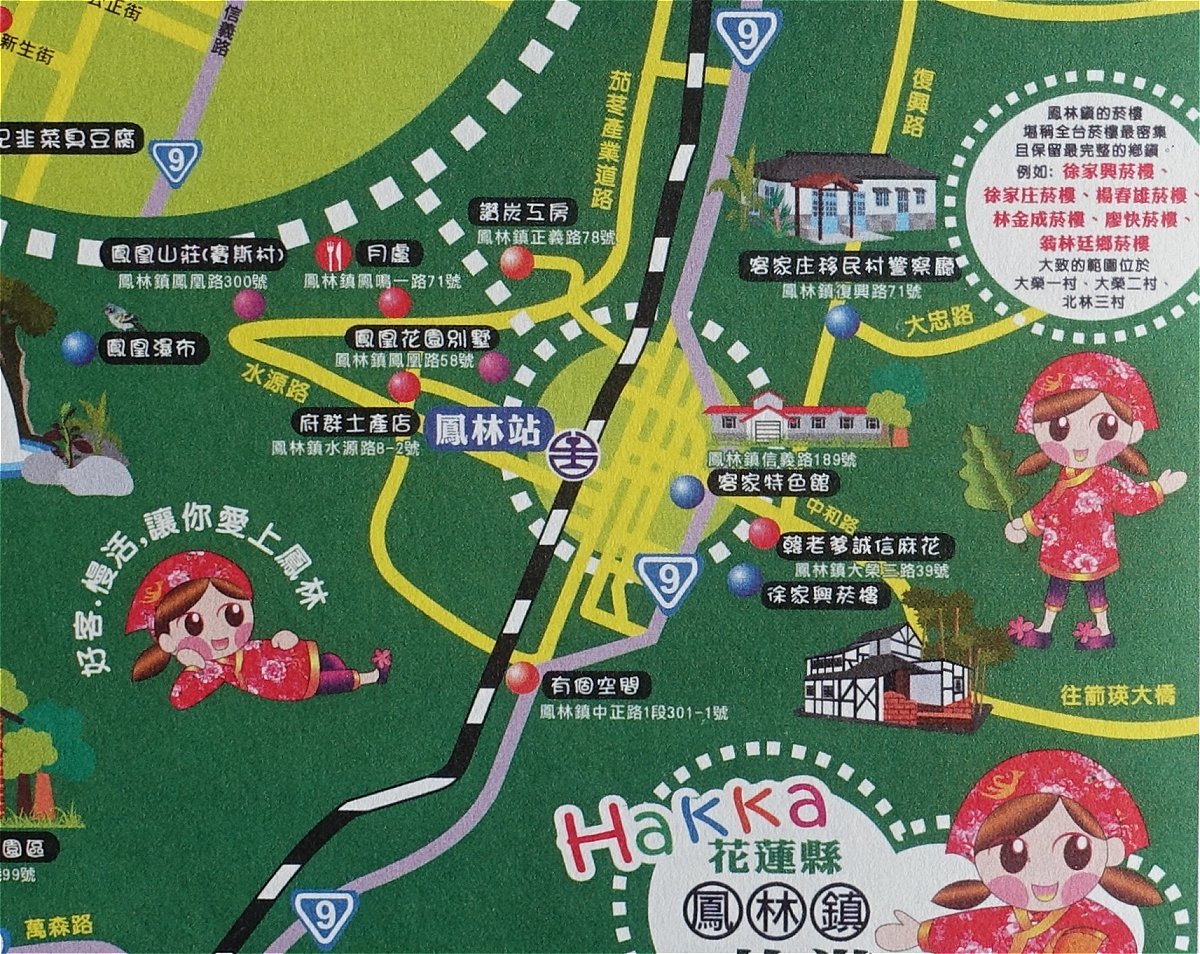 Maps mark the urban and social shape of cities (part 2)

Fenglin (sometimes written as Fonglin) is located south of the city of Hualien on the east coast of Taiwan. The place and the surrounding region have a rich social history that goes back to the original Aboriginal culture, but eventually the Chinese Hakka culture became dominant (since early 17th century). But Japan has also made its mark (as colonial regime, 1895-1945), particularly through economic and infrastructural development. Fenglin and some surrounding towns and villages together have less than 12 thousand inhabitants. Currently, tourism is dominant and of great importance to the local community. Fenglin is slightly below the middle of the card, while its centre is magnified in an insert (top left). The area is crossed in a north-south direction by highway 9 and a railway line, of which three stations are shown on the map, namely Nanping and Vang, with Fenglin station in between. The green map image is somewhat misleading when one considers that the ocean is located on the right, just outside the map, and the mountain range partly within the map on the left. The short distance between ocean and mountains, with a narrow strip of land in between, makes the scenery of Taiwan’s east coast extraordinarily spectacular.

The map covers an area not much more than 7 by 10 kilometres; the insert has a diameter of approximately one and a half kilometres. Besides infrastructure, tourist destinations dominate the legend of this evident tourist map. The bar at the bottom summarizes that legend succinctly: restaurants (red), beautiful landscape (blue), crafts and arts (orange), special locations (green) and places to stay (purple).

Such a map with only indications with Chinese characters quickly becomes something puzzling for those who don’t master Mandarin. Apart from the fact that the map loses much of its function for such an illiterate. That would be a shame, if only because the place name, Fenglin, already reveals and symbolizes a lot. That name contains the following three characters:

The first character means phoenix, which could indicate that the town once rose from the ashes. But in Chinese mythology, the phoenix represents the female sex in the world and, with the dragon, is a symbol of good luck. The second character is more unambiguous. It means forest, because it is composed of two tree signs. A single sign means tree, several trees make up a forest. Sometimes Chinese is simple. Then the third sign, which stands for hamlet, place or municipality. Fenglin encompasses several towns and villages, so the character here should be interpreted as ‘community’. The literal translation of Fenglin is therefore Phoenix Forest Community. Suppose this place is not on the east coast of Taiwan, but somewhere in Ireland or New Zealand, then the more creative name Phoenixwood would fit better. Blessed with the phoenix as a symbol of good luck, this municipality apparently enjoys even more prosperity, because the card image is brightened by an iconic lady dressed in red, and red is known in Chinese culture for the colour of good luck. The lady is a kind of mascot of this region where mainly Hakka-Chinese live. Though, until the 17th century Taiwan was exclusively inhabited by aborigines, closely related to the other peoples along the coasts and on the islands of the Pacific Ocean. But then came the Han-Chinese, where Hakka belongs to.

Between the white dotted lines at the bottom right of the map it says: “Hakka – Province Hualien – Phoenixwood. Travel map”. With her traditional floral print in red, the iconic lady symbolizes the Hakka culture, which is known for its red fabrics printed with Tung flowers. The top left of the card reads “WELCOME” in English, printed in the outline of a red Tung flower.

In the first half of the 20th century, Taiwan was occupied by Japan, which nevertheless developed the country with new industry and infrastructure. For example, the railway from Hualien to Fenglin and further was built by the Japanese. The tobacco industry from this region has also been initiated by them. Many of those old factories are now tourist attractions. Also during the Japanese time many Tung trees have been planted.

When the Tung flowers are in bloom from March to May, flower shows are organized all over Taiwan. This celebrates the Hakka culture, because the Tung trees are mainly planted in those areas where many Hakka-Chinese live. For sure, then it is party time in Phoenixwood.

The series ‘Maps mark the urban and social shape of cities’ is based on the former series Plattegrond, in Blauwe Kamer, a Dutch magazine for landscape architecture and urban planning (the series was published 2003-2020).

Previous issue of the City Maps series at Favas.net: Los Angeles and The Hague.