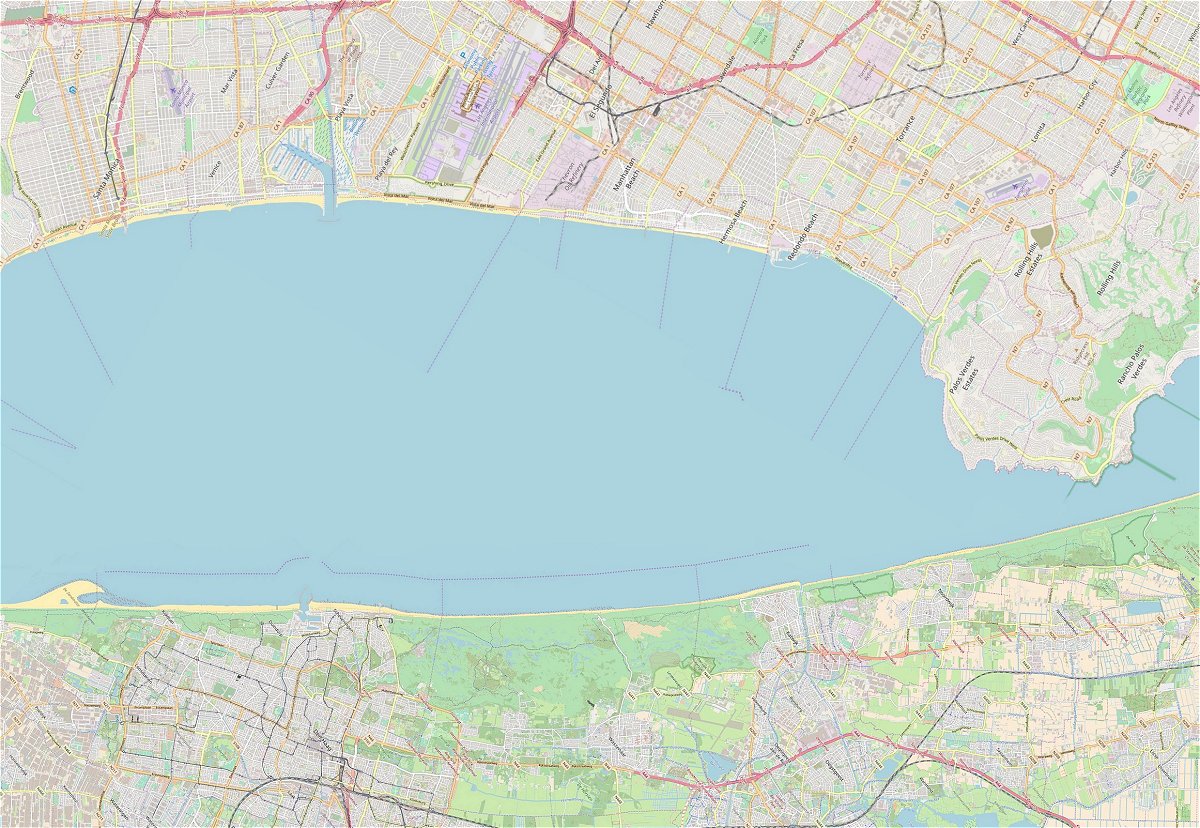 Maps mark the urban and social shape of cities (part 1)

According to residents and some urban planning connoisseurs in Los Angeles (LA for short) if it weren’t on the ocean, this place would be as uninhabitable as Phoenix, Arizona, in the middle of a desert. Phoenix suffers from scorching heat many days of the year, while LA enjoys a nice breeze, pleasant sunshine, sparkling ocean waters and beautiful beaches. So much for the cliché, because is LA really on the ocean? What do we see on the map? From the left we see the coastal towns of Santa Monica and Venice with their urban grid structures, and wealthy inhabitants. Further on is LAX Airport, an oil refinery, along a section of ‘poor’ beach, and then the vibrant towns of Manhattan Beach, Hermosa Beach, and Redondo Beach. Inland, at the top of the map, we can still see downtown LA. The distance from the Santa Monica pier to downtown LA is about 25 kilometres.

Is The Hague (Netherlands) a city by the sea? The map image speaks volumes. In any case, the dunes and some buildings of Scheveningen, the entire urban area on the map is a stone’s throw from the coast. The light from the lighthouse penetrates deep into The Hague in the evening. Almost the entire city is within cycling distance of the beach. From the Schevenings pier to the city centre of The Hague, the distance is not much more than 5 kilometres. On the left side of the map, The Hague by the sea is joined by the famous Sand Motor, while on the other side dunes stretch, interrupted only by one beach entrance (Wassenaarse Slag) and the seaside resorts of Katwijk and Noordwijk. It is not for nothing that two fragments have been composed next to each other on the map. Such a montage turns out to be a useful way of determining the size and characteristics of urban areas and their inhabitants. The length of the coasts shown here is over 34 kilometres.

What does this visualized equation teaches us? The short answer: Los Angeles is much bigger than The Hague. The city of LA, its downtown and other boroughs (such as West Hollywood and Compton) are not at all on the ocean. Santa Monica and Venice are villages on that ocean and are spatially, functionally, and to a great extent socially (and administratively, for that matter) separated from inland LA. Accordingly, the urban area is socially articulated. The richer coastal towns are separated from the poorer city districts (far) beyond. The metropolis of Los Angeles is of course located on the ocean. But when viewed on a larger scale, The Hague is a place by the sea like Santa Monica is by the ocean. And from this perspective, The Hague is a place that is part of a larger, metropolitan area, which is still referred to as the Randstad (i.e. urbanized Holland). Some find the Randstad designation somewhat outdated. But apart from that, the map makes it indirectly clear – certainly if zoomed out – that the size of the metropolitan context in The Hague is comparable to the size of the metropolis LA. And like in California, the urban area in Holland is socially articulated. The richer coastal areas are separated from the less prosperous neighbourhoods (far) beyond.

The equation visualized here teaches that scale matters. Equations become meaningless if the correct and comparable scales are not accurately used. So don’t compare apples with oranges.

The Netherlands is regarded by many laymen and some experts as “one big city”. However, the map montage proves this view makes little sense. The Hague is a place in the Randstad, which itself is a metropolitan area, just like Los Angeles. Both are of similar size, although LA metropolis is slightly deeper and would extend nearly as far as the German border (near the city of Arnhem) on a Dutch map. But if all this is correct, then LA is much smaller than the Netherlands. Another time in this series at Favas.net, montages from Singapore, New York and other metropolises will lead to a similar conclusion.

The map montage was created with OpenStreetMap. If you scroll from south to north on this map, the scale changes, i.e. the 1-kilometer bar gets longer and longer. After all, the projection expands proportionally. The Hague’s OpenStreetMap (latitude 52.08) must therefore be reduced by 72.4% in order to be accurately compared with that of LA (latitude 34.05).

The series ‘Maps mark the urban and social shape of cities’ is based on the former series Plattegrond, in Blauwe Kamer, a Dutch magazine for landscape architecture and urban planning (the series was published 2003-2020).

Next issue of the City Maps series at Favas.net: Fenglin (Taiwan), Culture and Tourism in Fenixwood.